It was 2 years ago that we visited Madanpur, a remote village in Murshidabad district of W Bengal with our partner SKMUK. People in Madanpur were drinking groundwater heavily contaminated with Arsenic for the last 25 years. Govt, NGOs, researchers came, studied, lectured and left while the people of Madanpur continued to suffer with a problem that challenged their very existence. The slow poison of Arsenic continued taking its toll of life, health and happiness. We understood that the problem could easily overwhelm us, but we had to do something…however humble.

We visited again the following year. This time we were confronted by an angry crowd, much like the previous time and the times that would follow. They objected to us entering the village if we were there to take pictures, feather our own nests and leave…and we gently convinced them to give us a chance. 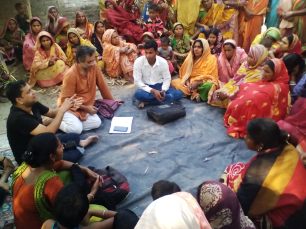 SKMUK is very deeply connected to a very large number of extremely marginalized women in a few blocks of Murshidabad district. They had already identified Hasiba – a young soft spoken mother of two as potential mobilizer. We pooled some money from our pockets to support her honorarium for a few months. She would organize the women in groups of ten or twelve and we would collectively try to work with the groups rather than the whole village all at the same time. 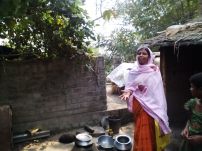 What were we to do? As apparent to us the problem was much more social than technical. While removing Arsenic is a complex technical problem, many models have been developed but most of them are socially unviable either because of high cost of maintenance, or because of designs that haven’t taken into account local conditions or something that changes the taste of the water significantly. And so we decided to keep our efforts humble – (1) the easiest and the cheapest way to co-precipitate Arsenic is to treat it with alum overnight. Although it does not reduce the content drastically, it is better than drinking with the full contamination and above all it is doable. (2) Arsenic slowly breaks down the immune system – what if we encouraged the families to grow organic kitchen gardens systematically and improve nutrition, especially for the children. And encourage them to increase protein intake by eating eggs. (3) The govt had laid a pipeline half a kilometer away from the village. What if the villagers organized themselves and put pressure on the govt? And we could facilitate?

As days went by, Hasiba brought together the women in groups and talked to them about using alum (and the optimum weight so that it doesn’t spoil the taste). Slowly the practice caught on and people started growing nutrition gardens in whatever areas they found around their homes.

The people marched to the office of the District Magistrate and the Block Development Officer demanding that they send clean water to Madanpur. It has been too much for too long! Enough is enough! We want our children to live! A year later people in Madanpur were lining up around the 3 time-taps – taps which release water during certain times of the day. These are the best sights and sounds in Madanpur besides the smiles of the people – a clear stream of water descending into the waiting pots.

Today almost every house in Madanpur is growing an organic kitchen garden…some have completely stopped buying from the market. Not only do the women grow the vegetables for their families but also share it with others. There are many families in the village where the husband had died of poisoning and the woman struggles by her herself to raise the children. There is unbound cooperation here – perhaps the people here have learnt that to be the best tool of ward off adversity.